The world economy – and emerging market and developing economies in particular – display a gap between infrastructure needs and its finance (Canuto, 2014). On the one hand, infrastructure investment has fallen far short of what would be necessary to support potential growth. On the other hand, abundant financial resources in world markets have been facing very low and decreasing interest rates, whereas opportunities of higher return from potential infrastructure assets are missed. Here we approach how a better match between private sector finance and infrastructure can be obtained if properly structured projects are developed, with risks and returns distributed in accordance with different incentives of stakeholders.

The world needs to invest an average of US$3.3 trillion, and emerging markets of US$1 to 1.5 trillion annually just to meet currently expected rates of growth.

The world currently spends US$2.5 trillion a year on infrastructure, and economists estimate that it needs to invest an average of US$3.3 trillion annually just to support currently expected rates of growth (McKinsey, 2016) - with energy requiring the largest amount (Figure 1). For emerging markets, the infrastructure financing gap is estimated at around $1 trillion to $1.5 trillion a year (World Economic Forum, 2016) (Figure 2). 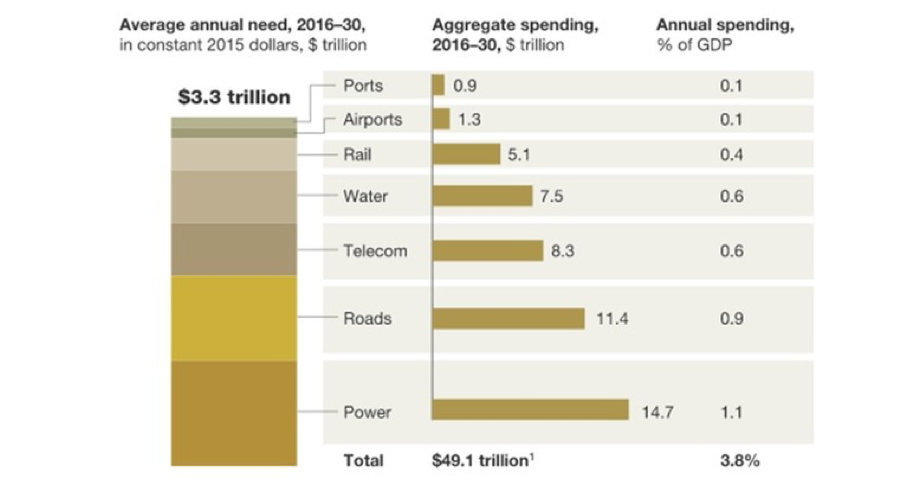 Figure 2: Infrastructure investment will continue to shift to emerging markets 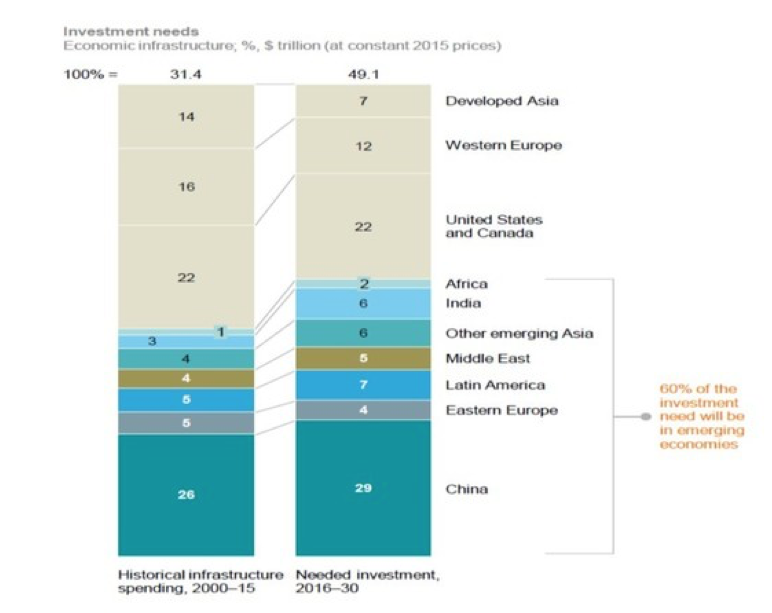 The current infrastructure investment including IFIs, public investment and PPPs is around US$1.7 trillion leaving the gap at more than US$1 trillion, but institutional investors and other private sector players could increase allocations under appropriate conditions…

Operational commitments of major international financial institutions (IFIs) total around $80 billion to $90 billion annually – less than 10 percent of the infrastructure financing gap for emerging markets (World Economic Forum, 2016) - and they are declining. Annual public investment in infrastructure is at about $1.5 trillion, and it is also decreasing due to fiscal deficits and increased public debt to GDP ratios. Public-Private-Partnerships (PPPs) account for another $120 billion. Leveraging private sector investment, as well as institutional investor capital are widely discussed as possibilities of addressing the needs going forward. Indeed, according to World Economic Forum (2016), institutional investors are currently managing assets “exceeding $50 trillion in 2015, compared to $30 trillion in 2007.” The same report also highlights that national savings in Asia alone were $1.36 trillion in 2011, and yet their investment in infrastructure currently represents a very small percentage of assets in equity/debt.

However, as the World Bank President Jim Yong Kim recently stated: “in our conversations with investors, nearly all of them say they would consider investing in emerging markets if it were less risky.” According to a survey of 500 institutional investors conducted by the Global Asset Management Firm Natixis (2016), about one-third (34%) of institutions report that “they are planning to increase allocations to real assets, including real estate, infrastructure and aircraft financing, in the next 12 months”, and for 63% of them the primary goal for investing in real assets is earning higher returns. After all, long-term yields in safe and liquid assets have been declining for some time (Figure 3). 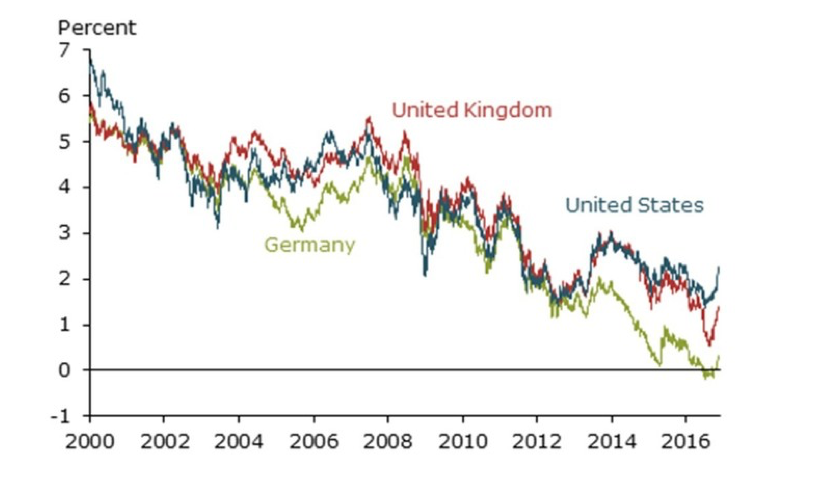 So far, infrastructure has been mostly financed by bank loans…

Institutional investors, like all other types of debt and equity investors, have their own incentives, constraints and objectives when it comes to selecting countries, types of projects (“Greenfield” vs. “Brownfield”) and at what stage of the investment project cycle (development, construction or operation) to invest. A quick snapshot of the global infrastructure finance shows that the main sources of infrastructure financing have been bank loans (Figure 4). In the case of new infrastructure in emerging and developing economies, according to estimates of the Intergovernmental Group of 24 (G24) and the Global Green Growth Institute (GGGI): “around 20% is financed by loans, mostly development banks and a share of the private investments); 56% is financed by budget, i.e., mainly by grants, and 24% is financed by equity and quasi-equity instruments coming from private investors” (G-24 and GGGI 2015).

Looking at infrastructure as an asset class, while comparing it to other asset classes such as government bonds, cash, equity markets, real estate and non-infrastructure alternative investments through the lenses of institutional investors and other stakeholders can help to identify and overcome mismatches between the demand for and potential supply of finance– an area where Development Financial Institutions (DFIs) can step-in.

Various reports indicate that as of now there is no systematic analysis of the type of risk instruments needed to unlock private investment in most infrastructure segments, yet inadequate coverage of risk is named as one of the reasons for projects not reaching financial close (World Economic Forum, 2016). Table 1 provides a summary of typical profiles of different stakeholders potentially participants in the value chain of financial services associated to infrastructure investments. Despite mismatches between their respective profiles and corresponding assets, pension funds, insurance companies and private equity funds have invested in unlisted infrastructure equity (Ehlers, 2014).Percentages are still small, but could be increased under appropriate circumstances. 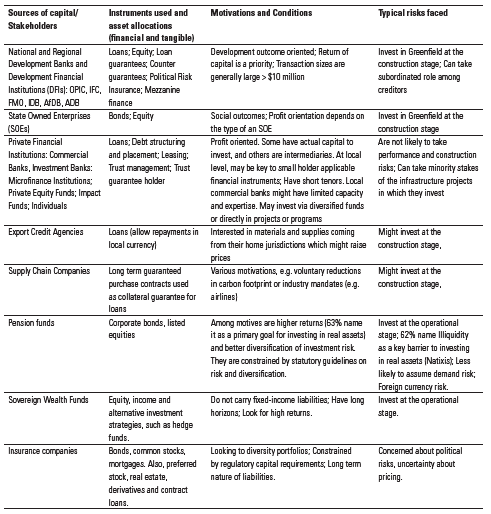 The unlisted infrastructure fund market represents a hope from this perspective as it allows to diversify risk. According to a survey of institutional investors conducted by Preqin, “three-quarters of respondents stated that the performance of their infrastructure and investments over 2015 had met or exceeded their expectations”, and “74% of fund managers are seeking greater appetite from investors” (Preqin, 2016). At the same time, the size of this market is very small compared to alternative asset classes, and transactions in more developed markets have taken prevalence.

Another trend has been a high concentration of capital among a very few infrastructure funds (Preqin, 2016): “179 unlisted infrastructure funds in market targeting $120bn in institutional capital”. Yet, very few of them are reaching final close each year. Also, “limited availability of attractive investment opportunities” is named as one of the reasons for the remaining 26 percent of investors who declared then to be planning to reduce the amount of their investments.

Defining the “attractive investment opportunities”, and matching investors to these opportunities in a more systematic way is what might make a difference. “Heterogeneity in the setup of projects” is often named as one of the reasons for why it is so difficult to push more allocations to infrastructure. Lack of data, different contractual structures, different regulatory environments – all these aspects are part of the puzzle and are being addressed by different players; but also, the breadth of products tailored specifically for different types of institutional investors with their respective risk and return profiles is where a higher effort may payoff.

Matching fees - e.g. charged by funds - to returns in the context of opportunities offered by other asset classes is an example of such a consideration. As widely discussed in the literature, pension funds are looking for “high returns, low risk, liquidity, fair pricing and reliable partners” (Catiana Garcia-Kilroy and Heinz P. Rudolph , 2017).

Based on the basic profiles listed on Table 1 and Table 2, one may notice that a scenario for institutional investors (e.g. a pension fund) to participate at the operational stage is typically favorable when refinancing is possible and the construction risk is addressed - particularly in those segments with lower risks (Figure 5). Examples of these transactions include Canadian investments in Chile such as the Pension Plan Investment Board (CPPIB) paying $1.14-billion for stakes in five major toll roads; AIMCo buying a 50 per cent interest in Autopista Central de Chile in late 2010 for $878-million, and Brookfield Asset Management buying six road projects in India, to name a few.

There are examples, however, of their participation at other stages of the cycle, including taking a construction risk. This tends to be the case when institutional investors participate in infrastructure projects in a search for higher yield – like sovereign wealth funds. This has been the case for 63% of surveyed investors by Natixis (2016). 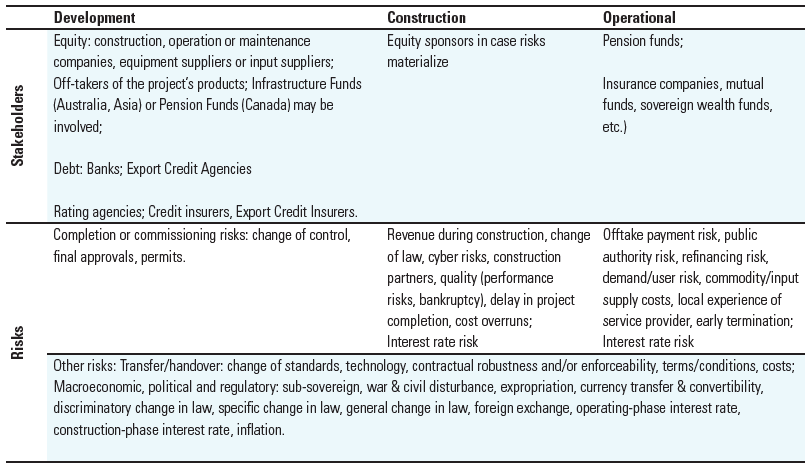 So far, institutional investors have mostly invested in upper-middle income and high income countries. Examples include Asian pension funds such as the Accident Compensation Corporation investing in New Zealand roads (primary financing) or State Super NSW investing in Australia transport sector. But there are also some cases like that of Care Super investing in hospitals in India. In Africa, there is a growing pool of investors coming from, mostly, the US, but also UAE, China and UK (Preqin, 2016).

Currency risk is a major factor faced by international investors in the emerging markets (Table 2). Export Credit Agencies can help with that challenge, although often at the expense of higher cost (Ehlers, 2014). Other challenges frequently named are the unavailability of financial instruments or their respective cost and complexity in terms of difficulty to use. Box 1 displays some regional differences in that regard as reported by World Bank, IMF and OECD (2016). 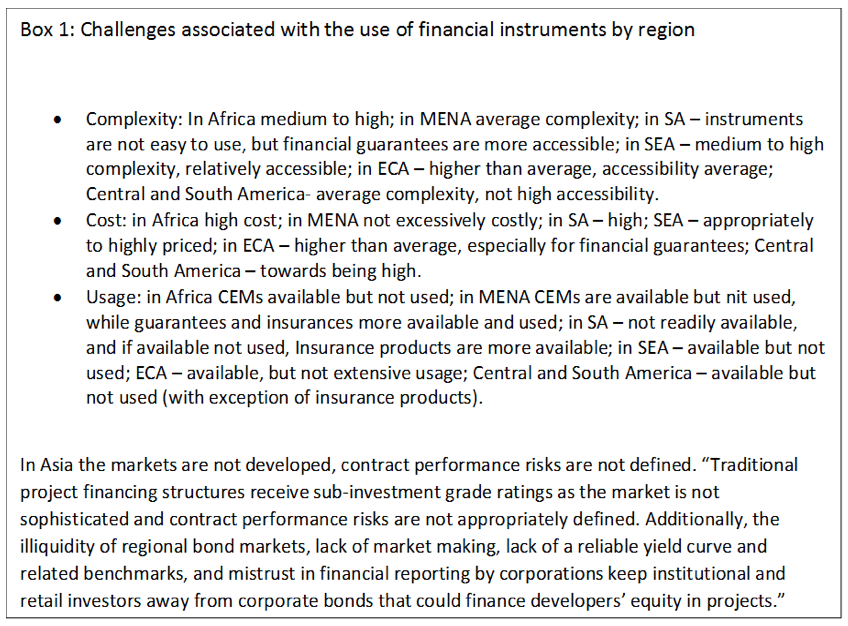 Fixed-income instruments such as bonds (in the context of infrastructure project: projects bonds, municipal, sub-sovereign bonds, green bonds and sukuk) and loans (Direct/Co-Investment lending to Infrastructure project, Syndicated Project Loans) are likely to be a better fit for the appetite of a broad range of institutional investors in emerging market economies: “significant innovation is taking place in product design that can potentially change the risks that institutional investors are willing to take and expand their investment in these two strategic sectors” (World Bank, IMF and OECD, 2016).

Development Financial Institutions have a key role to play

DFIs can offer a core financial additionality by playing a key role as a catalyst, drawing private capital into long-term projects in countries and sectors where significant development results can be expected, but the market perceives high risks. Those institutions contribute their own funding (loans, equity) and/or guarantees, providing partners with an improved creditor status. IFC, for example, has invested US$270 million of its own capital into the Queen Alia International Airport in Amman, Jordan. As a result, the project has been able to attract enough commercial financing to cover the rest. Over the last nine years Jordan has received more than one billion dollars in revenue – and that without having to pay back any project loans. Bringing partners into specific deals through syndications also generates additional financing (Canuto, 2014). Furthermore, they can support the development of pipelines of investable projects, the scarcity of which is also highlighted as an impediment to a higher commitment by non-banking financial institutions to infrastructure (Ehlers, 2014).

A whole set of mechanisms to assign part of risks to a third party through risk transfer and credit enhancement instruments is currently being piloted by development banks. These instruments include guarantees, insurance policies, or hedging mechanisms under which, for a fee, the provider will agree to compensate the concessionaire (or its lenders) in case of default and/or loss due to some specified circumstance.

The new 2.5 billion dollar IDA Private Sector Window provides an example of such an instrument – it includes a Risk Mitigation Facility to provide project-based guarantees without sovereign indemnity, and a Local Currency Facility to mitigate currency risk when markets are not yet developed. Another example is a joint effort of IFC and Sida: a platform allowing institutional investors (including those with relatively conservative risk profile, e.g. insurer Allianz) to invest in developing countries by providing a first loss guarantee of 10 percent. According to estimates, such platforms can mobilize up to 10 dollars of private money for every dollar of public money.

The contrast between the dearth of investments in infrastructure and the savings-liquidity glut that marks the contemporaneous global economy can be reduced. Low legal, regulatory, and policy risks are of the essence. Additionally, the availability of sophisticated, developed financial markets and instruments will help, as they facilitate partnerships among different financial agents to allow each one to carry risks that are closer to their will and capacity. The greater involvement of private investors and the design of economically rational financing structures can not only boost the funding of infrastructure investments but also thereby improve the efficiency and success of infrastructure projects. Development financial institutions may play an important role in such matchmaking.