Linkages and Interdependence in Moroccan Regions

Input-output tables provide a rich source of information about the structure of economies that is not available from other frameworks. In addition to providing key information for the analysis of linkages between activities (and regions), the tables also provide the underlying core database used in a range of economic models. If used appropriately, these more sophisticated models can meaningfully assess the impact of economic change, at the national and regional levels. They can also be used to assess the distributional effects of change across the industries and regions included in the input-output table. When linked to household consumption and income data, the distributional effects of economic policy change on households can also be assessed. In what follows, we discuss some of the structural features of the Moroccan economy derived from the interregional input-output matrix for Morocco. The focus is on the role of the linkages embedded in the productive structure of the country and its implications for the design of regional policies.

As part of an ongoing project that aims to develop an interregional computable general equilibrium model for Morocco, we have developed a fully specified interregional input-output matrix for the country (IIOM-MOR) [1]. This research venture is part of a technical cooperation initiative involving researchers from the Regional and Urban Economics Lab at the University of São Paulo (NEREUS), in Brazil, and the OCP Policy Center and the DEPF – Ministère de l’Économie et des Finances, in Morocco. The IIOM-MOR provides the opportunity to better understand the spatial linkage structure associated with the Moroccan economy in the context of its 12 regions, and 20 different sectors.

Input-output tables provide a rich source of information about the structure of economies that is not available from other frameworks. In addition to providing key information for the analysis of linkages between activities (and regions), the tables also provide the underlying core database used in a range of economic models. If used appropriately, these more sophisticated models can meaningfully assess the impact of economic change, at the national and regional levels. They can also be used to assess the distributional effects of change across the industries and regions included in the input-output table. When linked to household consumption and income data, the distributional effects of economic policy change on households can also be assessed. [2]

In what follows, we discuss some of the structural features of the Moroccan economy derived from the IIOM-MOR. The focus is on the role of the linkages embedded in the productive structure of the country and its implications for the design of regional policies.

The IIOM-MOR is calibrated for 2013 and consists of 12 regions and 20 sectors. Figure 1 shows, in monetary terms, how the flows of goods and services for production take place among the Moroccan regions: columns refer to the buying sectors and regions, and rows refer to the selling sectors and regions. The figure shows that, in productive terms, five relatively more integrated regions concentrated most of the flows: Casablanca, Rabat, Marrakech, Fès-Meknès and Tanger. As Table A1 indicates, these regions were responsible for more than 75% of the total output value of the Moroccan economy in 2013. For the remaining regions, there is practically little integration among them, with the production linkages taking place mainly inside each one of them, with some trade with Casablanca.

Figure 1. Interregional Flows of Goods and Services for Production in Morocco, 2013

Table 1 presents the regional output shares for the regions in Morocco. Casablanca dominates the national production, with a share of 35.7% in total output, followed by Rabat (13.0%), Marrakech (9.9%), Fes-Meknes (9.2%) and Tangier (8.8%). The regional output shares by sectors in Morocco reveal some evidence of spatial concentration of specific activities: agriculture in Fes-Meknes, Marrakech, Rabat, Casablanca, and Beni Mellal (69.7% of total output); fishing in Souss-Massa, Dakhla-Oued Eddahab, Guelmin-Oued Noun and Laayoune-Sakia Le Hamra (79.0%); mining in Beni Mellal and Marrakech (78.0%), manufacturing in Casablanca, where at least 50% of the output is generated for each of the sectors. Some regions play an important role in the production of specific manufacturing sectors, such as the food industry in Souss-Massa (12.6%) and Fes-Meknes (9.9%); textile and leather in Tangier (21.3%) and Fes-Meknes (11.3%); and mechanical, metal and electrical products in Tangier (26.4%). Services, in general, are concentrated in Rabat and Casablanca. However, Marrakech and Souss-Massa concentrate the major part of tourism services (36.8% and 26.4%, respectively).

Table 2 shows the sectoral shares in regional output, revealing the important role of some activities in relatively specialized regions: the dominant role of agriculture in Drâa-Tafilalet (27.5% of total regional output), Beni Mellal (25.6%) and Fès-Meknès (21.7%); fishing in Dahla-Oued Eddahab (38.6%); mining in Beni Mellal (21.%); food industry in Souss-Massa (21.1%); and the relevance of the public administration in the more remote regions of the south: Guelmin-Oued Noun (28.0%), Laayoune-Sakia Le Hamra (27.7%) and Dakhla-Oued Eddahab (20.7%).

Relative regional specialization can also be assessed by the calculation of the sectoral location quotients, as presented in Table 3. The highlighted cells identify sectors relatively concentrated in specific regions, i.e. sectors for which their share in total regional output is greater than the respective shares in national output (location quotient greater than unit).

The indicators described above are based on sectoral and regional shares of the IIOM-MOR, which only measure the regional distribution of economic activity in the country. In this section, a comparative analysis of regional economic structures is carried out. Production linkages between sectors are considered through the analysis of the intermediate inputs portion of the interregional input-output database. The purpose remains the comparison of economic structures rather than an evaluation of the methods of analysis themselves.

We can measure the importance of the sectors in terms of production generation in the economy using the pure linkage approach.[3][4] The Pure Total Linkage Index in Figure 2 takes into consideration the productive structure – both direct and indirect production linkage are captured – and the relative size of the sectors in each one of the Moroccan regions. The values are normalized by dividing the pure linkage in each sector by the average value of the pure linkage for the whole economy. The values provide useful information to rank the sectors and regions in groups by their order of importance.

Figure 2 reveals that the most important group of sectors is dominated by Grand Casablanca-Settat (R6). There is a second cluster of sectors that follows in their relative importance for the Moroccan economy, located mainly in Tangier-Tetouan-Al Hoceima (R1), Fes-Meknes (R3), Rabat-Sale-Kenitra (R4) and Marrakech-Safi (R7). Even though the remaining regions are less integrated, the clusters located in Drâa-Tafilalet (R8), Guelmim-Oued Noun (R10), Laayoune-Sakia El Hamra (R11), and Dakhla-Oued Eddahab (R12) seem to require special attention in terms of economic development and integration policies.

We decompose regional output by considering not only the multiplier structure, but also the structure of final demand in the 12 domestics and the foreign regions. [5] We also calculate the contributions of the components of final demand from different areas (Table 4). On average, the self-generated component of output in each region, i.e. the share of output generated by demand within the region, is lower in those regions that represent higher dependency upon the rest of the world (Casablanca, Tanger, Béni and Dakhla-Oued Eddahab). The demand for foreign exports is very relevant not only for Casablanca but also for other resource-based economies. Its contribution to the regional output can reach more than one-third of the regional output (20.9% for the country as a whole), as is the case of Dakhla-Oued Eddahab (39.9%) and Tanger (33.8%).

Taking a different focus, we can decompose value added by region according to the source of the final demand. The overall picture is slightly different from that of the output decomposition, especially for the share of international exports in the generation of regional value added, which tend to be systematically lower than the correspondent share in gross output (Figure 3).

Figure 3. Decomposition of Regional Value Added According to its Absorption by Final Users in the Regions of Morocco and Abroad, in %, 2013 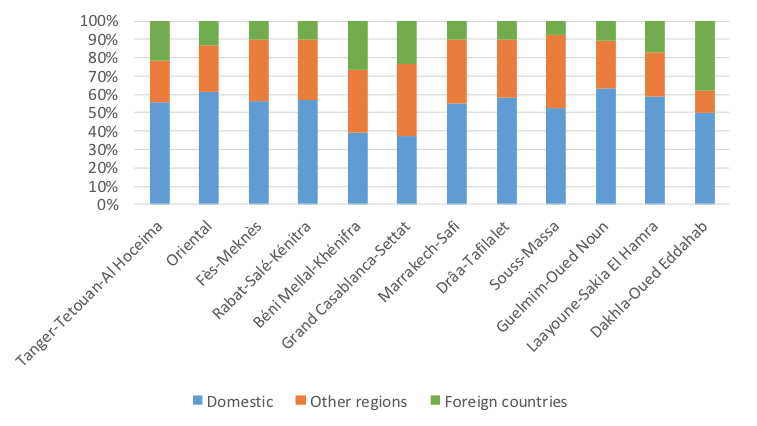 A more systematic approach to look at the influence of final demand from different areas is to map the column original estimates that generated Table 4. The results illustrated in Figure 4 provide an attempt to reveal the spatial patterns of output dependence upon specific sources of final demand. Figure 4 presents, for each demanding region, the distribution of their influence on output of all other regions in Morocco. The 12 regions are grouped in six different categories in each map, so that darker colors represent higher values.

Table 4. Components of Decomposition of Regional Output Based on the Sources of Final Demand: Morocco, 2013 (in %) 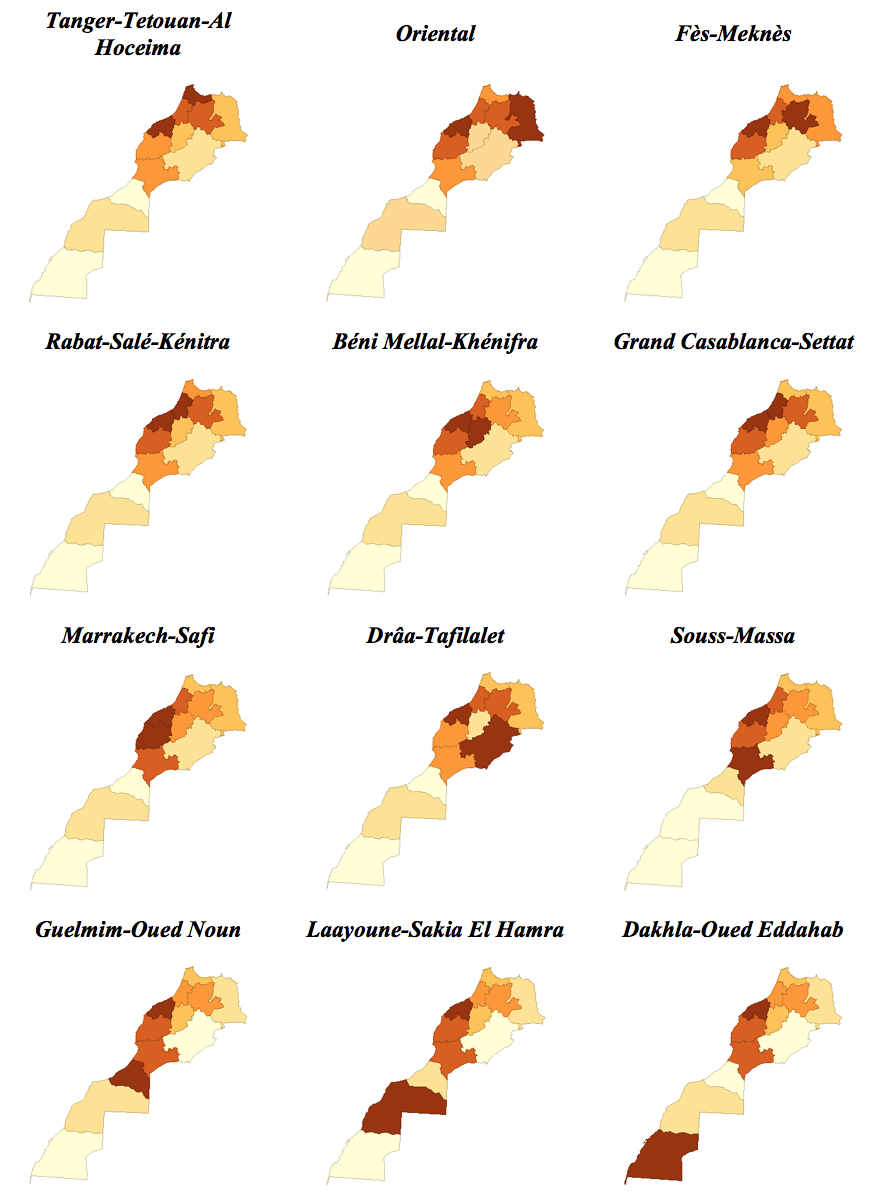 Trade in value added is defined as the value added embodied in the goods and services that are imported and exported. It is possible to trace a region’s participation in the domestic supply chain by adapting the methodology proposed in [6] to evaluate global supply chains. The method relies on “hypothetical extraction”, a parsimonious mathematical technique based on an input-output representation of the economy. We compare actual GRP in a region with hypothetical GRP in case there are no production activities related to exporting. The difference is defined as domestic value added in interregional sales and international exports.

Figure 5 calculates which part of GRP in each of the 12 Moroccan regions can be attributed to production related to exporting in general (sales to domestic and international markets). We map the regional value added in exports, providing a measure of the degree of a region’s dependence on trade. With the exception of Dakhla-Oued Eddahab, sales to other regions of the country embody more value added than sales to other countries. However, the relative importance of international exports vary across regions. The ratio of value added generated by interregional sales to value added generated by international exports ranges from 0.36 (Dakhla-Oued Eddahab) and 1.30 (Tangier-Tetouan-Al Hoceima) to 7.74 (Drâa-Tafilalet), 7.78 (Marrakech-Safi) and 8.09
(Souss-Massa). 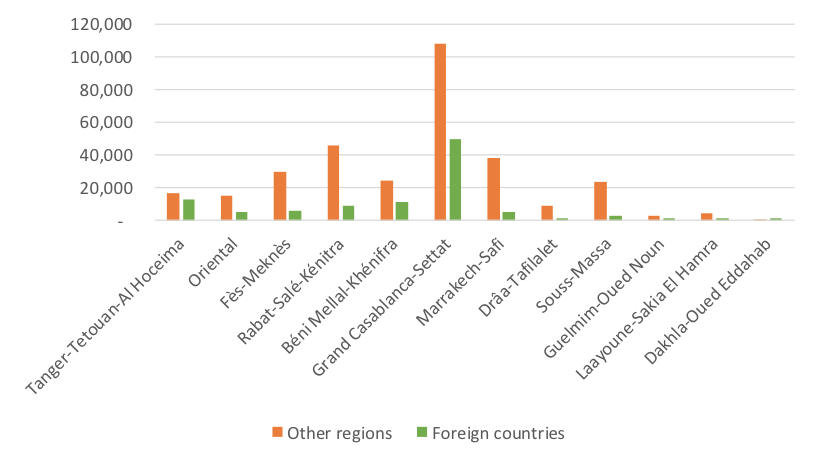 It is clear from the preceding analysis that the impact of interregional trade on regional economies should not be relegated to a secondary place. The analysis suggests that there are some important differences in the internal structure of the regional economies in Morocco and the external interactions among their different agents, reaffirming the role played by Casablanca and the major regional economies in the polarization process observed in the country.

One should consider interregional interactions for a better understanding of how the regional economies are affected, both in the international and in the domestic markets, as for the smaller economies, the performance of the more developed regions also plays a crucial role. As [7] observe, the usual region versus the rest of the world characterization of spatial interaction provides a convenient mechanism to generate demand-driven models, but it provides little insights into two properties associated with spatial interaction that have not featured prominently in regional models, namely, feedbacks and hierarchy. On one hand, interregional trade might generate the potential for the propagation of feedback effects that, in quantitative terms, could be larger than the effects generated by international trade. On the other hand, the impact of feedback effects will be determined, partly, by the hierarchical structure of the interregional system under consideration. Thus, in the Moroccan case, it is expected that the impacts of interregional trade related to Casablanca will differ from those from the other peripheral economies.