Chinese investors are increasingly interested in Africa. Some criticize them for privileging mining investments. A 2017 analysis of these investments shows that investments in mining have not been the only ones privileged by the Chinese operators. Many other sectors such as transport and energy have benefited from Chinese investments, much more so than the mining sector, for example.

Mining investments are all those relating to base metals / iron, copper, bauxite, aluminum, manganese, and all other metals or mineral resources such as phosphate. China alone supplies over 40% of world demand for these base metals. However, Chinese operators, although very present on most continents that have mineral resources, are of medium size, especially when compared to their competitors such as the Anglo-Australian company, Rio Tinto. These operators, with constant diplomatic and financial support, will enable China to progressively become a leading investor in mining on the African continent. As such, this article first takes inventory of these investments and operators in 2017 (I), and then demonstrates that these mining investments represent only a small but significant part, compared to investments on the African continent.

A – Major countries and minerals covered by these investments

Twelve countries where China has decided to invest in their subsoil have been selected for this assessment. Table 1 lists these countries in alphabetical order, for each of them specifying the activity in question and the Chinese operator responsible for this investment.

Table 1: Twelve countries that are beneficiaries of Chinese investments to extract their mineral deposits 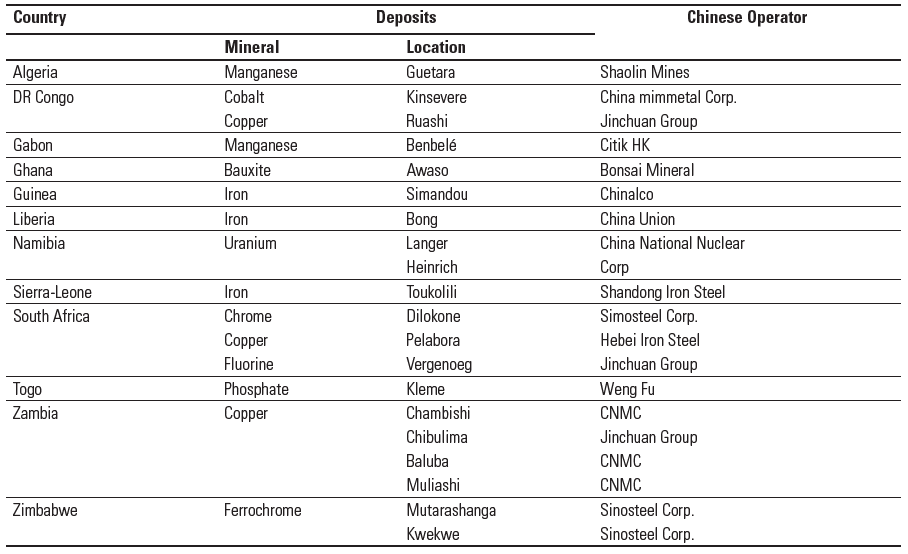 The Chinese authorities’ choices show that they favor a regime’s political stability over rule of law, which differentiates them from the Westerners who make the opposite choice. As such, they are only applying abroad, and thus in Africa, what they apply to themselves. This choice also has an economic logic based on the notion that a return on investment needs time to materialize.

By 2017, there are more minerals covered by these investments than the so-called base metals, since six of the ten listed in the table are not included: ferrochrome, chromium, cobalt, fluoride, phosphate and uranium. It is better to refer here to strategic minerals than staple ores. Among the ten, copper comes largely at the top (seven sites), followed by iron (three sites), manganese and ferrochrome (two sites). The countries that have benefited most based on the number of sites are Zambia (four sites), South Africa and DR Congo (three sites), Zimbabwe (two sites).

This study will cover, in alphabetical order:

Each group is different on certain points, and similar on others. Often different due to their origin, most groups are former traders that acquired shares of the local mining company and later bought the local mining company outright. Not all of them are, for example, mining companies in China. Almost all, on the other hand, are under the control of the Chinese state, which is at least a majority capital owner. Sometimes, the publicly traded subsidiaries are the operators, such as Citik HK. Previously, they were mostly specialized in a single ore. Today, under the pressure of the Chinese authorities, there are groupings of operators extracting a single ore in order to benefit from economies of scale. Still, at the request of the Chinese authorities, the most important of them diversify their portfolio. Thus, Jinchuan Group is present in two countries, Zambia and South Africa, and also controls fluoride deposit operation in South Africa and the copper deposit operation in Zambia. In general, all of these operators take their chance, by taking the opportunity when it presents itself to take control of the site operation and manage it directly.

Each of these investor / operator groups in Africa have not been addressed in this study, of course. However, four of the most important and most significant were selected:

The first three have a history as traders. This is not the case of the fourth (Weng Fu Group), which has a mining history in China.

In its recent history, this group confirms the will of the Chinese authorities:

Today, this group holds 92.5% of the capital and employs 130,000 people. It is an important group, majority owned by the Chinese state. It is listed in China (Shanghai and Hong Kong Stock Exchange) as well as in New York. It has other projects, also in Guinea, but for bauxite deposits.

Unlike CHINALCO, this group was originally specialized in trade and not in extraction, and was the main minerals relay for Chinese industrialists present in China. In 2015, it bought one of its major customers, the Metallurgical Corporation of China (MCC), which had mineral deposits throughout the country in a wide range of sectors, including iron, gold, molybdenum, tungsten – rare earths. Starting from its Australian subsidiary listed on the Sydney Stock Exchange (Minmetal Group), it began to take an interest in international markets with a first success in 2012, after purchasing Anvit Mining, a Canadian company operating the Kinsere copper deposit in Katanga (DR Congo). It also took an equity stake in a South African chrome mine at the Dilo Kong deposit. Now employing over 90,000 employees, this group, which is also majority-owned by the Chinese government, has a strong presence in South America, for example in Peru, with the acquisition of a Peruvian deposit in Las Bombas.

Last of the three groups, CNMC, was initially mainly interested in zinc, and to a lesser degree in lead, iron and gold. Employing over 50,000 people, it is present in Australia, Tajikistan, Kyrgyzstan, Vietnam, Iran, etc. and of course in Africa where it is mainly focused on copper.

CNMC has been present in Zambia since 1998, with the buy-back of the Chambeshi copper deposit, followed by the purchase of the Muliashi and Baluba copper deposits. Since 2016, in association with Gecamines, the national mining company of DR Congo, it has been working to complete the Deziwa copper deposit development project, starting from an original partnership that could well be applied elsewhere. This partnership involves the financing of the extraction of the site's deposits, as well as the construction of two processing units, financed by CNMC, which will be reimbursed through production, thus enabling the Congolese national company to gradually increase in capital, and become the operational pilot, once the debt is repaid.

Weng-Fu Group is a Chinese phosphate giant controlled by the Chinese State, the largest of its kind, extracts deposits and produces fertilizers (DSA, MAP, DAP) and phosphoric acid. Present in Maadan, Saudi Arabia, the Government of Togo has just awarded it the concession to extract the Kpeme phosphate deposit, in partnership with the Israeli group Elemito, through its subsidiary Ingel Invest Group, whose expertise is recognized in the mining and petroleum sector. In this partnership, the Israeli partner assumes the financial part and the Chinese partner manages the technical aspect of the project. This project is also original in that it is based on the use of the West African gas pipeline from Nigeria to Ghana, which enables phosphate extraction and enrichment in order to produce a low-cost concentrated phosphate. This project was initiated following the bankruptcy of the Togolese phosphate office, previously responsible for the site’s operations.

Today, China has experienced and capable operators that have invested in Africa. Although very different in origin, these operators all have patience and discretion in common. Of course, they are not the same size as their primary Anglo-Saxon and Anglo-Australian partners. That said, the facts discussed here demonstrate that performance is not necessarily related to size.

II – Chinese investments in Africa outside of the mining sector

According to the U.S based Heritage Foundation, over the 2005-2013 period (2012 data), Africa (any investment combined and cumulated) has benefited from Chinese investments equal to US$ 108 million. While over forty states have benefited, 73% of the US$ 108 billion has been divided among ten states. Table 3 lists these states, their respective populations and the amount of Chinese investments they received during the period.

Table 3: Top ten countries in Africa where China invested the most between 2005 and 2013.

The data used here are particularly interesting because they cover a fairly long and recent period, and it is known how difficult it is to have recent statistics in Africa and common to all African States. Moreover, this period is when commodity prices soared, which makes investments in these areas suspect investments. Since 2014, with the launch of a new fund - China Africa Growing Together – the Chinese strategy has been changing. Indeed, unlike another fund - China Africa Fund, which covers the 2005-2013 period, the China Africa Growing Together fund will no longer exclusively fund projects carried out by Chinese companies and Chinese employees on the African continent.

An analysis of the sectors that were beneficiaries of these investments indicates that among the ten countries, seven sectors have been given preference: energy, mining, transport, real estate, agriculture, finance and technology. All of these sectorial activities received a minimum investment of US $ 50 million. All other sector activities that received less than US $ 100 million in investments are not included in Table 4, which specifies the beneficiary of these investments by country and sector.

Table 4: Breakdown by country and by sector of activity of Chinese investments in 2005

The table reads as follow: in the case of Nigeria, for example, investments during the 2005-2012 period, estimated at US $ 15.6 billion, were divided into three sectors: energy, transport and real estate, which together accounted for US $ 15.2 billion, equal to 97% of the 15.6 billion received.

A first observation is that Chinese investors are targeting all African countries, those in sub-Saharan Africa as well as those in the Maghreb, the poorest and the richest, from Ethiopia and Nigeria to South Africa. Another observation is that the beneficiary sectors of these investments are not primarily those concerned with natural and petroleum resources. Since 2014, Chinese investments have been drastically reduced by 40-50%, which led the President of China at the last conference in Johannesburg in 2016 to propose an envelope of $ 60 billion to relaunch them in the coming years.

B – Investments that do not only focus on natural resources

The table below indicates the sectors concerned by these investments and their respective weightings, per country.

Table 5: Distribution of Chinese investments by sector and country 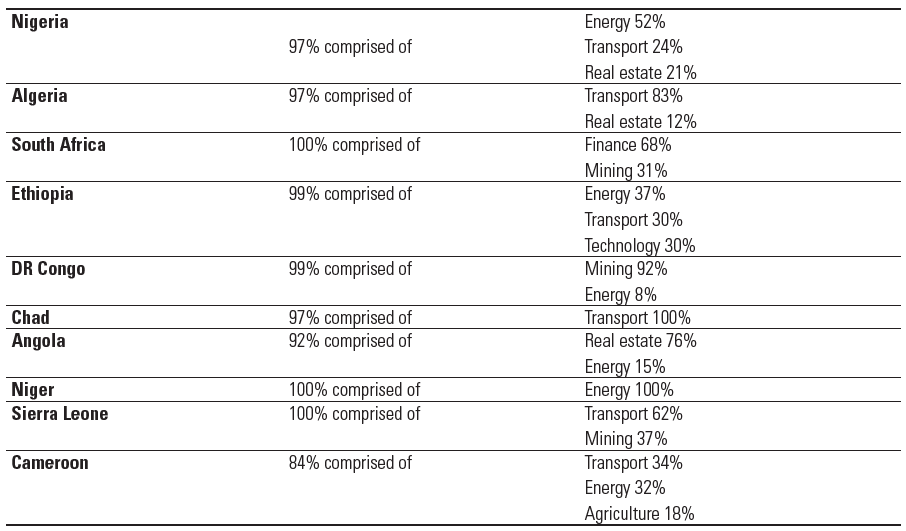 An analysis of the Chinese investments in the African mining sectors demonstrates that these sectors are involved, especially those relating to copper, iron and manganese, and show a very real and growing presence by Chinese operators on the African continent related to these deposits. On the other hand, it may be surprising to some that the mining sector is currently not the priority sector for Chinese investors. As it is sometimes said, the Chinese are interested in this market without limiting themselves to it. This will surprise some observers who often consider that the Chinese presence denotes predation or the return to a certain type of neocolonialism. The analysis shows that indeed this is not the case and that partnerships particularly in the mining sectors, are above all win-win partnerships in 2017.