Senior Fellow at OCP Policy Center, principal at Center for Macroeconomics and Development and non-resident fellow at Brookings Institute.

Former Vice President and Executive Director at the World Bank, Executive Director at the International Monetary Fund (IMF) and Vice President at the Inter-American Development Bank. He was also Deputy Minister for international affairs at Brazil’s Ministry of Finance, as well as professor of economics at University of São Paulo (USP) and University of Campinas (UNICAMP).

Former Foreign Minister of Mexico (2000-03), political scientist and author of more than 15 books on geopolitics.

Regular columnist for the Mexican daily El Financiero, the Spanish daily El País and The New York Times. In 1997, he was appointed Global Distinguished Professor of Political Science and Latin American Studies at New York University. Board member of Human Rights Watch (HRW) since 2003.

Former economist in the World Bank’s Economic Policy and Debt Department of the Poverty Reduction and Economic Management Network.

Member of a study team working on African Competitiveness in Simple, Light Manufactured Products and Editor of the volume « Technology, Adaptation and Exports: How Some Developing Countries Did It », with 10 case studies from different sectors - agriculture, horticulture, floriculture, forestry, fishery, electronics and software.

Former President of the Rockefeller Foundation (1998-2004), Chief Scientific Adviser to DFID and President of the Royal Geographical Society (2004-09), Vice-Chancellor of the University of Sussex. Trained in agricultural ecology, he was a pioneer of sustainable agriculture developing integrated pest management programs for the State of Sabah in Malaysia. Author of One Billion Hungry: Can we Feed the World? (2012). 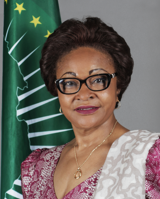 H.E. Madam Josefa Leonel Correia Sacko, an Angolan national, is a leading African Agronomist. She was elected as the new Commissioner for Rural Economy and Agriculture of the African Union Commission.

Prior to that, She was a Special Adviser to two Ministers in Angola, her home country: the Angolan Minister of Environment where she also served as Ambassador responsible for Climate Change. In the Department of the minister of Agriculture Mme Sacko oversaw Food Security, Eradication of Hunger and Poverty Reduction. The former Secretary General of the Inter African Coffee Organization (IACO) for 13 years in Cote D’Ivoire where she represented Coffee economy for 25 African Coffee producing countries. During her tenure, she successfully advocated for the empowerment of small scale coffee farmers across the continent by setting up Regional Centres of Excellence for Capacity Building of Member States, on Genetic Material Conservation, Coffee Quality Improvement and Cup Tasting Liquor in Cote d’Ivoire, Uganda, Camero on and Zambia. Madam Sacko is one of the African Women Africa should be proud of, and she has built up her international profile and reputation by working with Regional, Global Institutional on Agriculture and many other sectors supported by World Trade Organization (WTO), African Union (AU), International Coffee Organization (ICO), African Development Bank (AFDB), African Bank for Export and Import (AFREXIMBANK), (FAO), UNECA, NEPAD etc. The other notable cooperation/partnerships she has worked with include the Regional Economic Communities (RECS), namely, SADC, COMESA, ECOWAS and EAC, where she has actively participated to address the challenges encountered by small scale farmers in Africa, ensuring that they remain a central focus in regional and national policy making for development. Madam Sacko speaks fluent Portuguese, French, English, Spanish and Lingala.

President of the national committee in charge of organizing the Africa-France Summit that took place on January 2017 in Bamako, founder in 2001 of the think tank Bamako Forum, rebranded as Foundation Forum of Bamako.

He launched the executive MBA program sponsored by the  Quebec university in Montreal (UQAM) in Mali, then extended it to found the IHEM in March 2000 in Bamako, the first private institute to offer high level certified trainings in partnership with foreign universities.

Regional Director of the International Organization for Migration (IOM) for West and Central Africa since January 2016.

He Works for the IOM since 1994 and was previously Chief of Mission in Afghanistan (2013-16). He contributed to initiating the Bali Process on migrant smuggling, human trafficking and the related transnational crime. He was also a founding member of the steering committee of the United Nations Global Initiative to Fight Human Trafficking (UN.GIFT) and Chair of the World Economic Forum (WEF) Council on Illicit Trade and Organized Crime. He is now a member of the WEF’s Board on the future of migration.

Professor at Universidad Anahuac Mexico and Senior associate of the Mexican Council on Foreign Relations (COMEXI).